The BNP Paribas Prize for Individual Philanthropy awards two prizes annually to exemplary philanthropists for the achievements and sustainability of their projects. 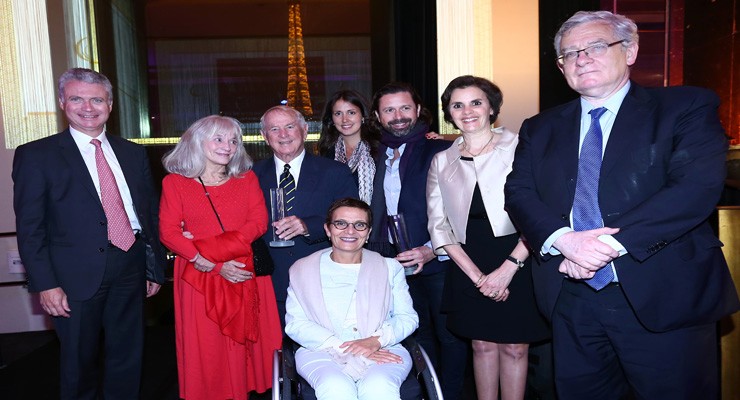 In 2008, the BNP Paribas Prize for Individual Philanthropy was created to provide models for its own clients and philanthropists around the world. Each year, two annual awards - the Grand Prize and the Special Prize - recognize philanthropic projects that are exemplary in terms of achievement and sustainability, with the Grand Prize rewarding dedication, professionalism and results, while the Special Prize acknowledges strong personal involvement in a local project.

The independent jury is comprised of distinguished public figures from the fields of education, economics and culture. Each year, it takes into account the vote of the previous year's laureates.

Amina Slaoui - President of the Jury

President of the AMH Group and SOS Group in Morocco.

Amina Slaoui, a passionate advocate of social entrepreneurship, is president of the AMH Group and SOS Group in Morocco.

Group AMH aims to increase the social inclusion of disadvantaged people and those living with disability. She is responsible for the construction and success of Morocco’s first medical physical rehabilitation centre. She was the first winner of BNP Paribas’ Jury Special Prize for Individual Philanthropy in 2008.

He was a board member, a member of the Audit Committee and Chairman of the Financial Committee at AB Inbev for over 30 years.

Michael Golden was appointed vice chairman of The New York Times Company in October 1997 and was elected and has served on the company’s board of directors since 1997.

From 2009 to January 2012, Mr. Golden served as president and COO of The New York Times Company Regional Media Group and as publisher of the International Herald Tribune from 2003 to 2008. He earned a master’s degree in journalism from the University of Missouri in Columbia and an MBA from Emory University, Atlanta, Georgia.

Banker and Board Member of several listed companies

After having studied economics in Switzerland and Austria, Lorenz von Habsburg joined the family-owned private bank in Switzerland of which he is now one of the managing partners. He is also a board member of several companies in Europe and is regularly consulted by financial institutions.

Michael de Giorgio is the chief executive officer of Greenhouse Sports and the 2012 Special jury Prize laureate. Qualified as a chartered accountant (Price Waterhouse) he was the founder and managing director of Intercontinental Finance Ltd. He launched his own financial consultancy firm (1986) and co-founded “Greenhouse Charity” in 2002 after selling his business.

The charity uses high quality sport coaching to help transform the lives of London’s most disadvantaged young people. In recognition of his philanthropic work, he carried the Olympic torch in 2012.

Executive Director of the ADIE Endowment

Catherine Monnier is the executive director of the ADIE endowment fund which supports micro-entrepreneurs. She graduated from Lyon’s École de Management and worked for many years in marketing and development in the food and consumer goods industry.

In 2003 she joined the “Fondation pour la Recherche Médicale” as its communications, fundraising and donor relations director. She joined ADIE in 2009. She is currently vice-president of the French Foundation Centre (CFF).

Fayeeza and Arif Naqvi have always been steeped in philanthropy. Both were born in Karachi, Pakistan, and witnessed hardship in their home country firsthand. They established the Aman Trust in 2006 as a vehicle to support their capital commitment towards giving back and in 2008, the Naqvi family established the Aman Foundation in Pakistan.

The Aman Foundation operates in the healthcare and education sectors.

Molly Melching has lived in Senegal for over 40 years. Her experience living and working in a Senegalese village led her to found Tostan in 1991 and pioneer a new type of development approach: the Community Empowerment Programme (CEP).

Ed Scott been called Silicon Valley's most effective giver and his catalytic approach to philanthropy has had a transformative impact on poverty and disease at on a global scale.

Starting his philanthropy at a small-scale, Ed soon turned his attention to how governments could help make an impact on development. Ed created the Center for Global Development, Friends the Global Fight Against AIDS, Tuberculosis, and Malaria and DATA (Debt, AIDS, Trade, Africa) with Bill Gates and George Soros.

The businessman Yann Borgstedt is the founder and president of the Womanity Foundation which aims to empower women and girls.

The foundation operates all over the world in order to improve education - by providing quality training to more than 32 000 girls in Afghanistan - and by strengthening women's role in society through various media projects throughout the Middle East and North Africa, notably the first commercial radio station run by women, Radio Nisaa. The foundation also supports social entrepreneurs working for women’s empowerment in Brazil and in India.

In 2008, Fayeeza and Arif Naqvi established the Aman Foundation in Pakistan. Operating out of Karachi in the healthcare and education sectors, it has built a unique track-record through grant-giving and direct investment in a series of programs designed to create sustainable and systemic impact in the country. Though a non-profit, Aman runs on clear business principles and carries out its mission using a talent base of professionals primarily from private-sector backgrounds.

Molly Melching, founder of Tostan, has lived in Senegal for over 40 years. Her experience living and working in a Senegalese village led her to found Tostan in 1991 and pioneer the Community Empowerment Program (CEP). Tostan, which means “breakthrough” in the Wolof language, engages and empowers African communities through informal, human rights based education taught in local languages and uses methods incorporating positive elements of African culture.

Charly and Lisa Kleissner received 2014 Grand Prize for their global work in impact investing. Through their creation of impact networks designed to serve both social entrepreneurs and impact investors, combined with their commitment to align 100% of their assets with their values, the Kleissners have demonstrated that impact investing can be a replicable investment strategy for philanthropists worldwide.

Tomasz and Barbara Sadowski are awarded the Jury’s Special Prize for their social integration work and promotion of their social franchise model in Poland and abroad. The Barka* Foundation for Mutual Help, established in 1989, empowers and reintegrates socially marginalized groups through education, training, entrepreneurship and housing programs.

Nadar established the Shiv Nadar Foundation in 1994 as a driver of social change and transformational education through its landmark institutions from schools to universities. In the last 17 years, over 13000 students have been directly impacted by the Foundation’s initiatives.

Chuck Slaughter founded Living Goods, the ‘Avon of pro-poor products’, which empowers micro entrepreneurs to deliver life-changing products to the doorsteps of people in need.

In 1994, Viviane Senna Da Silva founded the Ayrton Senna Institute to foster the potential of future generations. The Institute develops educational programs and has already invested over €86 million, assisting countless children and young adults in 26 Brazilian states and qualifying 694,000 educators. Ayrton Senna Institute is the first NGO ever to receive recognition from UNESCO as Chair in Education and Human Development.

Michael de Giorgio is the Chief Executive of Greenhouse Charity and the 2012 Special Jury Prize laureate. Qualified as a Chartered Accountant (Price Waterhouse) he was the founding Director of Intercontinental Finance Ltd.

The Vehbi Koç Foundation aims to contribute to Turkey’s rapid development in the fields of education, healthcare and culture. In addition to the activities of its long-standing centres of excellence, the Foundation is currently focusing on creating replicable models in education, particularly with regard to teachers’ empowerment and re-designing learning environments.

"It is my privilege to have been one of the co-founders of the British disability charity, The Cambodia Trust, which transformed the provision of prosthetic and orthotic (P&O) care in war-ravaged Cambodia between 1989 and 2014. Its greatest achievement was the foundation in 1994 of the Cambodian School of Prosthetics and Orthotics (CSPO) in Phnom Penh, which has graduated over 200 P&O professionals from all over South and Southeast Asia. It went on to found schools in Sri Lanka, Myanmar (Burma), the Philippines and Indonesia, where I was for four years Country Director and Head of Research & Development (2008-2012).

The Trust is no more as it was dissolved in 2014 and replaced by Exceed Worldwide, but its legacy lives on in the many thousands of people with disabilities."

Since 2000, the Lucie and André Chagnon Foundation has been actively working towards its mission of preventing poverty through educational opportunity. To do so, it supports thousands of local and regional communities throughout Quebec working together to create environments and conditions favourable to the educational success of young Quebecers. To complement its community mobilisation initiatives, the Foundation organises awareness and dialogue campaigns.

Chung To is the founder of the Chi Heng Foundation, which has cumulatively supported over 20,000 AIDS-impacted children and youth in China since 2002. Over the last few years, Chung has been focusing his efforts on social enterprises, including an Ecobag workshop, a French bakery school and a French bakery and cafe in Shanghai.

The Vallet Foundation was created in 1999 by Professor Odon Vallet, a religious historian.

He pledged the inheritance he received from his father to finance the education of needy students in France, Vietnam and Benin. In terms of excellence scholarships, the Vallet Foundation is the largest of its kind in the world. It has in 17 years awarded over 51,000 scholarships; several thousand of the former prize winners have graduated from the largest European and American schools and universities.

In Benin, the Foundation established the largest network of libraries and language laboratories in French-speaking Africa.

Since its creation in 1989 by Albina du Boisrouvray, FXB International has been fighting against poverty by developing Community Development Programs FXBVillage in 9 countries. In total, 170 FXBVillage programs have led about 85,000 adults and children towards economic and social autonomy in Burundi, China, Colombia, India, Mongolia, Uganda, Rwanda, DRC and Thailand.

This expertise has been shared in 2015 through the publication of a step-by-step open-source guide to the implementation of a FXBVillage program, open to all development actors.

At the same time, education, health and protection programs were also continuously developed, especially in South Africa and Myanmar. FXB has taken a more proactive stance in the fight against global warming and malnutrition through a sustainable agricultural biochar project in Rwanda.

Dr Ibrahim is the Founder and Chair of the Mo Ibrahim Foundation, established in 2006 to support good governance and exceptional leadership on the African continent. In 1989 he founded Mobile Systems International (MSI) and in 1998, Celtel International, one of Africa’s leading mobile telephone companies.

He is also Founding Chairman of Satya Capital Limited, a private equity fund focused on Africa, and Chairman of TPG-Satya, a Joint African Investment Alliance.

Founded in 1992 and recognized to be of public utility, the AMH Group is a social entrepreneurship association active in the fields of health, education, training and autonomy. Its mission is to improve health and promote the economic and social inclusion of vulnerable people.